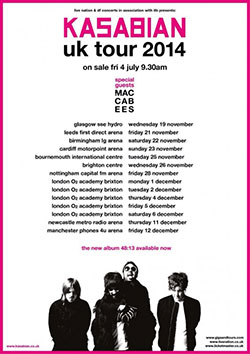 The Leicester band will be touring in support of their recently released fifth studio album, 48:13, which went straight to No.1 in the UK chart. The album became the band's fourth consecutive UK No.1 record.

Kasabian will perform the following shows during their winter 2014 tour:

Kasabian will be supported by indie rock band The Maccabees throughout the tour.