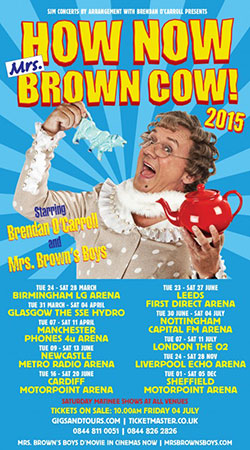 Brendan O'Carroll and Mrs Brown's Boys have announced a new arena show for 2015, titled 'How Now Mrs Brown Cow!'. The show will be touring the UK's biggest arenas from March through to December next year.

Mrs Brown's Boys has been a roaring success during the past few years – with three award-winning TV series, three sell-out arena tours and a big-screen movie. This success looks set to continue into 2015 with the announcement of this new arena show.

How Now Mrs Brown Cow! will be performed at the following venues in 2015:

Mrs Brown can currently be seen on the big-screen following the recent release of Mrs Brown's Boys D'Movie (see trailer below).

Tickets for Mrs Brown's Boys 2015 UK arena tour will go on general sale at 10am on Friday 4th July.