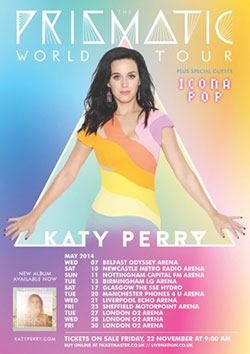 Katy Perry has today announced the first dates for her upcoming 'Prismatic World Tour'. The American singer will begin the world tour in the UK, with a series of arena shows planned for May 2014.

Katy Perry's 'Prismatic World Tour' will be in support of her fourth studio album, Prism, which topped the UK chart following its release in October, becoming her second UK No.1 album.

Joining Katy as special guests on the UK leg of the tour will be Swedish synth-pop duo Icona Pop.

The following UK shows have so far been confirmed for Katy Perry's 'Prismatic World Tour' in 2014:

Tickets for Katy Perry's 2014 UK tour dates will go on general sale at 9am on Friday 22nd November.