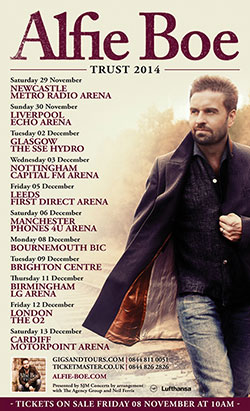 Alfie Boe's 2014 UK arena tour will be in support of his new album, Trust, which is due for release next Monday (11th Nov). The new album sees Alfie move away from classical and opera, and instead features a collection of well know old favourites such as Georgia On My Mind, You've Got A Friend and Glory, Glory Hallelujah.

Alfie will perform songs from his latest album, as well as his previous repertoire, when he goes on tour next year.

Alfie Boe's 2014 UK arena tour begins in Newcastle on 29th November and ends in Cardiff on 13th December. The full schedule for the tour is shown below:

Tickets for Alfie Boe's 2014 UK arena tour go on general sale at 10am on Friday 8th November. A fan pre-sale will also begin at 9am tomorrow (6th Nov), and can be accessed via Alfie Boe's official website.