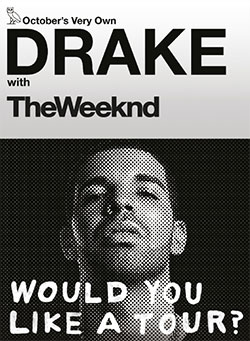 Drake has announced plans for a seven city UK arena tour in March 2014. The Grammy Award-winning Canadian rapper will perform shows in Manchester, Sheffield, Glasgow, Nottingham, Birmingham, Liverpool and London during the tour.

The tour will be in support of Drake's third studio album, Nothing Was The Same, which hit the No.1 spot on the US Billboard 200 chart following its release last month.

Joining Drake on his UK tour will be fellow Canadian recording artist The Weeknd.

The full schedule for Drake's 2014 UK tour is as follows:

Tickets for Drake's 2014 UK tour will go on general sale at 9am on Friday 1st November. A pre-sale for O2 customers will also begin at 9am on Wednesday 30th October.