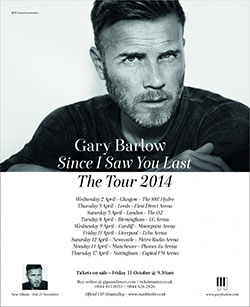 Gary Barlow has today announced plans for a solo UK arena tour to take place in April 2014. The Take That frontman will visit nine cities across the UK during the tour, which will be in support of his forthcoming album.

Since I Saw You Last is Gary Barlow's first full-length solo studio album in fourteen years, and is due for release on 25th November. The lead single from the album, a track called Let Me Go, is due to be released on 17th November. The new album includes a duet with Sir Elton John called Face To Face.

The schedule for Gary Barlow's 2014 UK arena tour is as follow:

Tickets for Gary Barlow's 2014 UK arena tour will go on general sale at 9:30am on Friday 11th October. There will also be an exclusive ticket pre-sale on Wednesday 9th October for fans who pre-order a copy of Since I Saw You Last from the official Gary Barlow store.