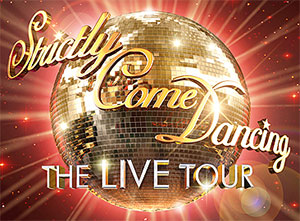 Len Goodman, Craig Revel Horwood and Bruno Tonioli will join the tour as judges, giving their expert feedback and all important scores to the celebrities and their dance partners.

The full list of venues and dates for the Strictly Come Dancing Live 2014 tour is shown below:

Speaking about the upcoming tour, here's what the judges had to say:

Head Judge Len Goodman: "It's a great thrill to take the cream of what promises to be another electric TV series out on the road for the seventh Strictly UK Tour. Strictly will again pull out all the stops with an outstanding line up of celebs and I'm really looking forward to finding out who will be joining Craig, Bruno and myself on tour."

Craig Revel Horwood: "Taking Strictly around the country and performing live to thousands of people every night is always such a pleasure. I'm extremely excited to be directing the show again, and already planning a fab-u-lous extravaganza. This tour will be the most amazing yet!"

Bruno Tonoli: "Another series of Strictly, another superb line up of beautiful celebs and an incredible seventh live tour. Who could ask for more?! Fantastico!"

Tickets for the Strictly Come Dancing Live 2014 tour will go on general sale at 9am on Monday 9th September. There will also be venue pre-sales from Thursday 5th September.