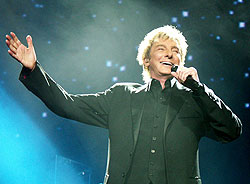 Barry Manilow has announced that he will return to the UK in May 2014 for a series of arena and open air shows. The musical legend will perform shows in London, Ipswich, Manchester, Glasgow, Cardiff and Southampton during the tour.

Barry Manilow's 2014 UK tour will begin with two shows at Wembley Arena, on Tuesday 13th and Wednesday 14th May, and will conclude with a huge show at the O2 Arena on 26th May.

As well as the arena shows, a couple of outdoor shows have been scheduled at Ipswich FC and Hampshire CCC.

The full list of venues and dates for Barry Manilow's 2014 UK tour is as follows:

Tickets will go on general sale at 9am on Friday 27th September. A special ticket pre-sale will also be available for members of Barry Manilow's International Fan Club (BMIFC), which begins at 6pm on Wednesday 4th September.