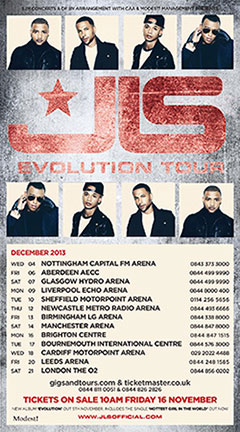 JLS have announced plans for a huge pre-Christmas arena tour to take place next year. The Evolution UK arena tour will see JLS perform gigs at thirteen of the UK's biggest arenas throughout December 2013.

The newly announced tour will be in support of the band's latest album, Evolution, which was released last week and entered the UK chart at number 3.

The Evolution tour will include stops at two brand new arenas that aren't yet fully complete: Glasgow Hydro Arena (7th Dec) and Leeds Arena (20th Dec). The full list of venues and dates is shown below:

Tickets for the JLS Evolution UK arena tour will go on general sale at 10am on Friday 16th November. Subscribers to the JLS mailing list will also be offered the opportunity to purchase tickets earlier via a special pre-sale which begins on Wednesday 14th November.