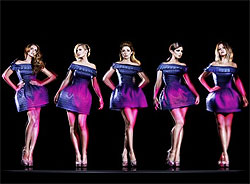 Girls Aloud have announced plans for a 12-date UK arena tour in 2013. The five-piece girl group have reunited to celebrate the 10th anniversary of their formation on the ITV talent show 'Popstars: The Rivals', and will release a greatest hits album in November.

Announcing their reunion plans at a press conference in London on Friday afternoon, Cheryl Cole said: "We're really excited. It feels like nothing has changed." Nicola Roberts added: "It's worked out really nicely that it's our 10th anniversary year. It was meant to be."

Girls Aloud will perform the following dates on their 2013 reunion tour:

The group will release a brand new greatest hits album, Ten, on 26th November. Fans who pre-order the new album will be offered the chance to buy tickets for the tour during a special pre-sale period.

Tickets for the Girls Aloud 2013 reunion tour will go on general sale at 9am on Friday 26th October.