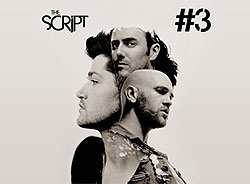 The Script have today announced a 12-date arena tour for March 2013. The tour will be in support of the band's recently released third studio album, #3, and will visit the largest arenas across the UK and Ireland.

Speaking about the upcoming tour in a promotional video on the band's website, Danny O'Donoghue says: "We're The Script and we're coming back out on tour with #3. We're heading across all of the UK and Ireland. We just got finished recording the album and now it's time to take these songs out on tour. Coming to you in March 2013!"

Danny then continues: "The Script, I believe, are best when we're out on the road, on stage in front of people. We love the recording process, but taking this music out to the masses - that's where it is for us."

The Script will perform the following shows during the band's 2013 arena tour:

Tickets for The Script's 2013 arena tour will go on general sale at 9:30am on Friday 21st September. A special pre-sale is also available for subscribers to the band's newsletter, and tickets will be available from 9:30am on Wednesday 19th September via the newsletter links.