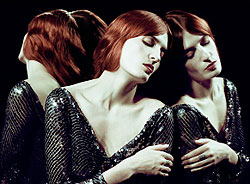 Florence and the Machine have announced a handful of UK arena gigs to take place in December. The band will perform gigs in Exeter, London, Coventry, Aberdeen and Liverpool to cap an amazing year on the road.

Since releasing Ceremonials in late 2011, Florence and the Machine have barely stopped touring - performing gigs as far afield as Australia, Brazil, Japan and the USA.

The band will return home in December to perform the following dates:

Tickets for Flo's December UK tour will go on general sale at 9am on Friday 14th September. A special pre-sale will also be available via tickets.florenceandthemachine.net from 9am on Wednesday 12th September.