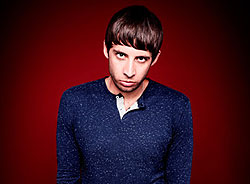 Example has announced a 12-date UK arena tour to take place in February and March 2013. The rapper will begin his run of arena gigs in Bournemouth on 11th February and will close the tour at Manchester Arena on 1st March.

The tour will be in support of Example's fourth studio album, The Evolution of Man, which is due to be released in November.

Example will perform at the following venues during his 2013 UK arena tour:

London-based dubstep producer Benga Live will provide the support for all dates on the tour.

Tickets for Example's 2013 UK arena tour will go on general sale at 9am on Friday 24th February.