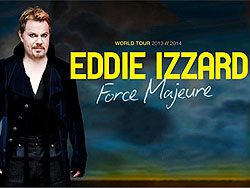 Eddie Izzard has today announced details of the most extensive comedy tour ever undertaken by a stand-up comedian. Eddie's Force Majeure world tour will take in a total of 25 countries throughout Europe, USA, Africa, Russia, Australia, New Zealand, India, Nepal and The Far East during 2013 and 2014!

Eddie, who is widely regarded as one of the finest comedians in the business, will begin his mammoth comedy tour in Scandinavia next April. The tour will then arrive in the UK & Ireland during May and early June, when Eddie will perform at the following venues:

Tickets for Eddie Izzard's Force Majeure UK & Ireland tour dates will go on general sale at 10am on Friday 4th May.