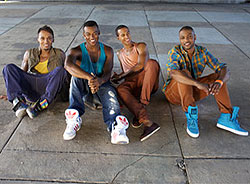 JLS today announced that they will perform a series of open-air concerts at venues across the UK this summer. The boys will perform a total of eight outdoor shows, starting at Scarborough Open Air Theatre on 18th August and ending at Lincolnshire Showground on 2nd September.

JLS will play the following dates during their summer tour:

JLS are currently touring the UK's arenas as part of The 4th Dimension Tour. The arena tour began last night in Liverpool and continues through until the end of April.

Tickets for the newly announced summer shows went on sale today at 10am.