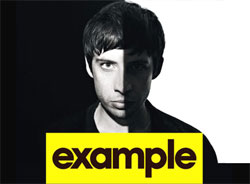 Hot on the heels of celebrating his first UK number one album, Example has unveiled plans for a series of UK arena tour dates in April 2012. The London born chart-topper will perform the biggest headline gigs of his career when he takes to the stage at some of the UK's largest arenas next year.

Example will begin his 2012 UK arena tour with a show at the Aberdeen AECC on the 24th April. This will be closely followed by further shows at: Nottingham Arena (26th Apr), London O2 Arena (27th Apr), Manchester MEN Arena (28th Apr) and Bournemouth BIC (30th Apr).

Example scored his first ever UK album chart number one yesterday, when his third studio LP, Playing In The Shadows, hit the top spot. The album has also spawned two number one hit singles - Changed The Way You Kiss Me and Stay Awake.

Speaking about his chart success on Twitter yesterday, Example said: “When I started in this industry all I ever wanted was a No. 1 album. Today I can be proud. Thankyou all so much for you support. Elliot”

Tickets to see Example on next year's arena tour will go on general sale at 9am on Friday 16th September.

Fellow rapper Wretch 32 has been confirmed as the support act for Example on his 2012 UK arena tour.

Tickets for the five new dates go on sale at 9am on Friday 23rd September.