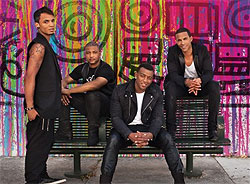 JLS have announced a UK arena tour to take place in March and April 2012. The 4th Dimension Tour will see the chart-topping boy band perform a total of 12 arena dates across the UK, including two huge shows at the O2 Arena in London.

The boys recently scored their fifth UK number one single with She Makes Me Wanna. The track was taken from the band's third studio album, which is due for release later this autumn.

Speaking about their latest tour, JLS said: “We can't wait to headline our second arena tour. It's been an incredible few years for us and the 4th Dimension tour is going to be amazing. We're really excited to perform tracks off our brand new album as well as fan favourites. We are working really hard to make this tour a huge experience for our fans. There will be some surprises in store!”

JLS will also perform a set at the Michael Jackson tribute concert, which is due to take place at Cardiff's Millennium Stadium in early October.

Tickets to see JLS on The 4th Dimension Tour will go on general sale at 9am on Friday 9th September.