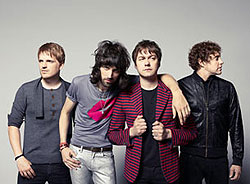 British rockers Kasabian have announced a 10-date UK arena tour, due to take place later this year in November and December. The tour will see the Leicestershire-based band perform at some of the UK's biggest arenas, and includes a huge tour-ending show planned for the O2 Arena in London.

Kasabian will be touring in support of their eagerly awaited fourth studio album, Velociraptor!, which is due for release on 19th September.

Tickets to see Kasabian on their UK arena tour will go on general sale at 9am on Friday 2nd September.

UPDATE: An extra Scottish date has been added to the tour - Aberdeen AECC (12th Dec).