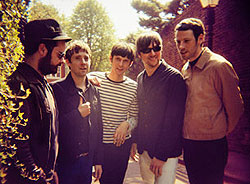 Kaiser Chiefs have announced details of a new UK tour, due to take place in early 2012. It will be the band's first full UK tour in two years, and follows a series of very successful festival appearances this summer. The tour will visit a total of 20 venues around the UK during January and February of next year.

The Kaisers released their fourth studio album, The Future Is Medieval, in June and allowed fans to create their own version of the album by selecting a track-listing and choosing their own artwork.

Tickets to see Kaiser Chiefs on their 2012 UK tour will go on general sale at 9am on Friday 26th August.