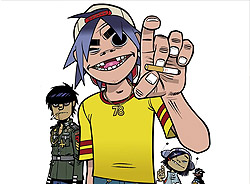 Brit-pop legends Gorillaz has announced that it will be performing at some of the UK's biggest and best arenas this coming September. Animations will be provided as part of the backdrop by original band member, Jamie Hewlett.

Guests will include Kano, they Hypnotic Brass Ensemble and Mos Def and will conclude with a two night stint at the London O2.