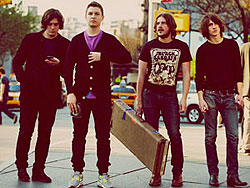 Sheffield's finest indie rockers, Arctic Monkeys, have revealed that they could be heading out on a full UK tour this November. Speaking to Zane Lowe on Radio 1 yesterday evening, Alex Turner and Matt Helders were asked when people can expect to see the band headlining a UK tour. They tentatively responded that they might go on tour during November, although nothing is 'nailed on' yet.

Alex Turner and Matt Helders were in the Radio 1 studio to premiere the first single to be taken from the band's forthcoming album. The single, Don't Sit Down 'Cause I've Moved Your Chair, is available as a digital download from today, whilst the band's fourth album, Suck It and See, is due to be released on 6th June.

Arctic Monkeys will perform two huge homecoming gigs in Sheffield's Don Valley Stadium on the 10th and 11th June, shortly after the new album comes out. Arctic Monkeys also have headline slots lined up at V Festival and Oxegen this summer.