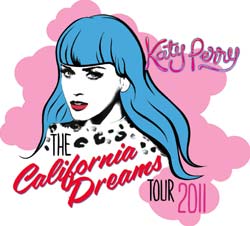 Katy Perry has announced a second leg to her California Dreams tour, due to overwhelming demand for her Spring 2011 shows. The new dates have been scheduled for Autumn 2011 and will include a total of 12 arena shows across the UK and Ireland.

Tickets for Katy Perry's new shows will go on general sale at 9am on Friday 10th December.