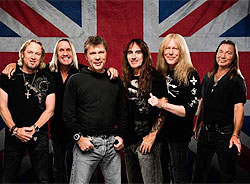 Iron Maiden are set to fly 55,000 miles around the globe starting in February 2011 for the next leg of their Final Frontier World Tour. The first of the many dates will be in Moscow on 11th February before they jet off to Singapore, Indonesia, Australia, Japan, South America and finally arrive in Europe in July. Iron Maiden have said they will be undertaking a full European tour in Summer 2011.

The Final Frontier Tour, which has already played 36 nights throughout the world, will extend well into 2011. Lead singer, Bruce Dickinson has said of the tour:

"The set list will be different to this year's tour. Of course we will play more songs from the new album and some other recent material, but we will include a healthy dose of older fan favourites as we will be playing to so many new faces who we know will want to hear those songs live for the first time. We will cram into the plane as much of the production we used this year as is physically possible, including of course Eddie, and intend to replicate the spectacular light show in as many places as we are able. All in all it promises to be a fantastic trip for everyone!! So see you all soon".

Only dates for Denmark, Sweden, Norway, Finland and Russia have been announced for Europe so far but a note at the bottom of the announcement on the official Iron Maiden website (made at 6pm this evening) says:

'UK fans - don't worry, we most certainly haven't forgotten you... you're next!!'

Update 22nd November 2010: Iron Maiden today added an extra date at the O2 Arena. They will now appear at the O2 Arena in London on the 5th and 6th August 2011.

Update 18th February 2011: Iron Maiden have announced the support acts for their forthcoming UK tour. They will be joined by Australian rockers Airbourne at all locations except Belfast and London. Iron Maiden will be supported by Dragonforce at their Belfast show (3rd August) and also at their first date at London's O2 Arena (5th August). Iron Maiden will then be supported by Trivium during their second date at London's O2 Arena (6th August).