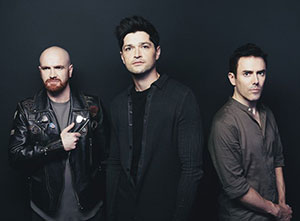 The Script in Sheffield

The Script will be touring the UK's arenas in support of their new album, Sunsets & Full Moons, in 2020. The Irish alt-pop trio will play live at Sheffield's FlyDSA Arena on Wednesday 26th February as part of the tour with support from Becky Hill.

Tickets to see The Script live on tour at the FlyDSA Arena went on general sale on Friday 18th October, priced from £27.50 plus fees.