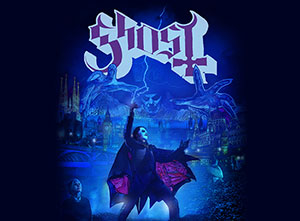 Where: The SSE Arena, Wembley

Ghost will visit the UK during the autumn of 2019 for a series of arena shows. The Swedish rock band will play live at Wembley's SSE Arena on Friday 22nd November as part of The Ultimate Tour Named Death with support from All Them Witches and Tribulation.

Tickets to see Ghost live on tour at the SSE Arena went on general sale on Friday 12th July, priced from £35 plus fees.