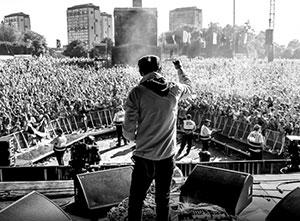 Gerry Cinnamon will embark on his biggest UK tour to date during the autumn of 2019. The Scottish singer-songwriter will play live at Liverpool's M&S Bank Arena (formerly Echo Arena) on Thursday 7th November as part of the tour with support from The Coral.

Tickets to see Gerry Cinnamon live on tour at the M&S Bank Arena went on general sale on Friday 21st June, priced from £19.50 plus fees.