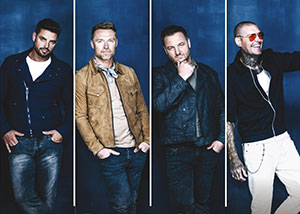 After 25 years together, Boyzone will be touring the UK for the very last time in 2019. The veteran Irish boy band will play a show at Manchester Arena on Saturday 19th October as part of The Final Five farewell tour.

Tickets to see Boyzone live on tour at Manchester Arena went on general sale on Tuesday 30th April, priced from £45 plus fees.