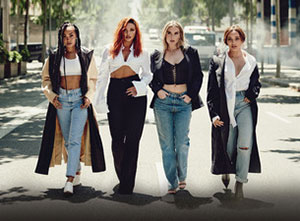 Little Mix will be touring the UK in support of their fifth studio album during the autumn of 2019. Perrie, Jesy, Leigh-Anne and Jade will perform live at Liverpool's M&S Bank Arena (formerly Echo Arena) on 21st and 22nd October as part of the LM5 Tour.

Tickets to see Little Mix live on tour at the M&S Bank Arena went on general sale on Friday 26th October, priced from £29.50 plus booking fees.