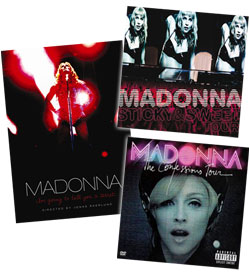 Madonna recently announced a worldwide tour for 2012, including shows planned for London and Edinburgh this summer. To celebrate the fact that the 'Queen of Pop' is coming to the UK on tour, we've put together a great competition in which you can win a bundle of live tour CD/DVDs featuring Madonna's last three concert tours.

There are two prize bundles to be won, and each bundle consists of the following CD/DVDs:

The two lucky winners were: