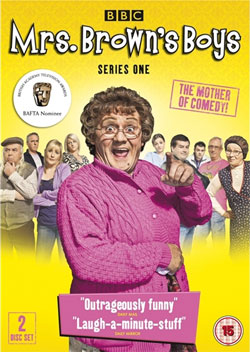 Mrs Brown's Boys was the smash hit TV comedy series that first aired on BBC1 last year. This hilarious sitcom was written by Irish comedian Brendan O'Carroll, who also played the part of the foul-mouthed matriarch Agnes Brown. We've got three brand new DVD copies of Mrs Brown's Boys (Series 1) to give away to three of our lucky readers.

The TV show proved so popular that a theatre-style production of Mrs Brown's Boys is now touring the UK and Ireland. Mrs Brown Rides Again will be performed at arenas across the UK and Ireland during 2012, with tickets for all dates selling fast.

This competition closed on 12th February 2012.