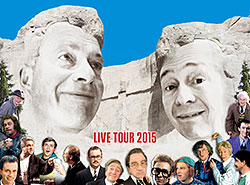 Harry Enfield and Paul Whitehouse have been working together for 25 years. During that time they've created many classic TV comedy characters – including Loadsamoney, the Old Gits, Smashie and Nicey, Kevin the Teenager, Julio Geordio, The Scoucers, The Writer and the Landlady, The Surgeons, to name but a few.

Harry Enfield and Paul Whitehouse took their TV comedy characters on tour in the autumn of 2015. The Legends! UK tour saw the characters appear live on stage for the first time.