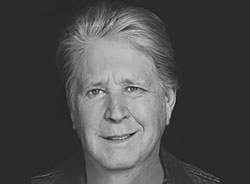 Brian Wilson is a founding member of The Beach Boys and is widely acknowledged as being one of the most innovative and influential artists within popular music. In addition to his involvement with The Beach Boys, Brian Wilson has recorded eleven solo studio albums. His latest studio album – No Pier Pressure – was released in April 2015.

Brian Wilson had intended to tour the UK in September 2015, however, the tour will no longer go ahead 'due to commitments in the US'. He is expected to tour in 2016 instead.