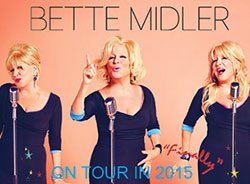 During an illustrious career, Bette Midler has won three Grammy Awards, four Golden Globes, three Emmy Awards and a special Tony Award. Bette Midler has an incredible range of talents – singer-songwriter, actress, comedian, film producer and entrepreneur – which have made her one of America's best loved entertainers.

Bette Midler released her 14th studio album, It's the Girls!, in November 2014. The album features Bette Midler's interpretations of songs by the great girl groups.

Bette Midler last toured the UK in July 2015. It was the first time she had performed on the UK stage in 35 years.