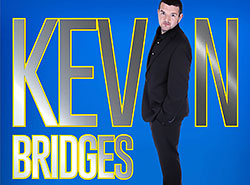 Kevin Bridges has had an astonishing rise to success in recent years, and is now widely regarded as one of UK's very best stand-up comedians. He's been dubbed as "brilliant" by his comedy idol and fellow Glaswegian Billy Connolly.

Kevin Bridges hit the road in 2015 with his new stand-up show, A Whole Different Story, which visited venues across the UK & Ireland.