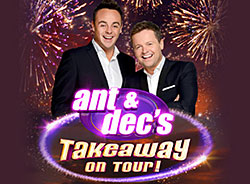 Comedy and TV presenting duo Ant & Dec first rose to fame as actors on the children's television show Byker Grove. Since those early days, the pair have gone on to present all manner of TV shows including: Pop Idol, I'm a Celebrity...Get Me Out of Here! and Britain's Got Talent to name but a few.

One of Ant & Dec's longest running and most successful shows is Ant & Dec's Saturday Night Takeaway, which is presented and executively produced by the duo. The show first broadcast in 2002 and has proved to be a big ratings hit over the years.

Throughout August and September 2014, Ant & Dec toured the UK's biggest arenas with a live production of their Saturday Night Takeaway.