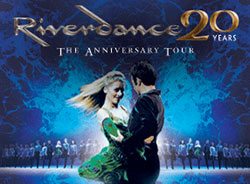 Riverdance is the Irish dancing phenomenon that came to prominence during the 1994 Eurovision Song Contest. In summary, it is story of the Irish culture and of the Irish immigration to America. Since its watershed moment in 1994, Riverdance has been performed to packed audiences across the globe.

To celebrate two decades of global success, a special 20th Anniversary Tour will take place during 2014. Riverdance will be performed at 16 venues across the UK during the tour.