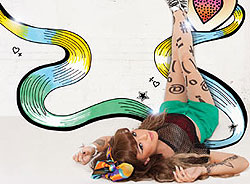 Cher Lloyd was a contestant on the seventh series of the X Factor in 2010. Despite finishing the contest in fourth place, Cher was quickly signed to Simon Cowell's Syco record label. Cher's debut album, Sticks & Stones, was released in November 2011. The first single to be released from the album was a track called Swagger Jagger, which went to No.1 in the UK chart.

Cher Lloyd completed her first full UK tour in the spring of 2012, when she performed tracks from her debut album Sticks & Stones.

Cher's second studio album, Sorry I'm Late, is due for release in 2014.