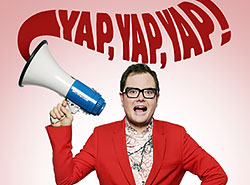 Toothy comedian Alan Carr is a regular on the comedy stand-up circuit and has performed at all the major comedy festivals. His comedy chat show Alan Carr: Chatty Man has been on air since 2009 and has won several TV awards.

In 2011, Alan Carr performed his Spexy Beast stand-up comedy show at arenas across the UK & Ireland during a 33-date tour.

Alan Carr's Yap Yap Yap stand-up comedy tour will see him perform 120 shows across the UK & Ireland from February right through to December 2015.