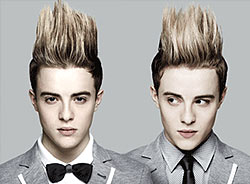 Jedward is made up of brothers John Paul Henry Daniel Richard Grimes and Edward Peter Anthony Kevin Patrick Grimes who made their break into the pop world by appearing on the X Factor in 2009. From their very first appearance, Jedward were plunged into the 'Marmite' love them or hate them category and I still can't help chuckling when I think back to their introduction, which went along the lines of: 'Hi, I'm John, and I'm Edward, and together we are... John and Edward!'.

John and Edward were Louis Walsh's only hope for winning the 2009 series of the X Factor, as hopeless as that seemed at the time. As the first few weeks of the competition finals progressed, Louis' groups dwindled until he was left with just the one act. At one point there seemed to be nothing the boys could do wrong and escaped the 'bottom two' in all but one of the first six weeks.

In week five of the finals Jedward found themselves up against Welsh favourite Lucie Jones and Simon Cowell refused to cast a vote to kick either act out of the competition. Following the deadlock the decision went down to the telephone vote and Lucie was dismissed from the competition which generated much negative press. The boys were 'racked with guilt' because of the decision and sincerely apologised to Lucie. Two weeks later and the boys were back in the bottom two, this time being eliminated whilst up against Olly Murs.

After leaving the competition John and Edward took on the name Jedward, which had become their adopted stage-name. They signed with Modest! Management and agreed to a one-album deal with Sony for a sum of £90,000. Then, in May 2010, Universal signed them for a three-album deal under the management of Louis Walsh again.

Their debut album, Planet Jedward, was released in July 2010 and peaked at number 17 in the UK chart. The first single to be released, a cover of Under Pressure with Vanilla Ice, achieved the number two spot in the UK singles chart but hit the top in their home country of Ireland.

Jedward released their second album, Victory, in August 2011 and have a UK tour planned for November and December 2011.