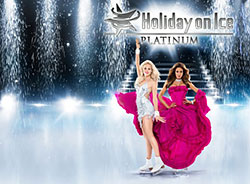 Holiday On Ice is a theatrical production staged entirely on ice. The show features world class skaters performing spectacularly choreographed routines, accompanied by music that has been composed especially for the show. Holiday On Ice originated in the USA during the early 1940s, but today there are a number of productions touring simultaneously, visiting more than 100 cities around the world.

Holiday On Ice is great entertainment for the entire family. Each year's production seems to push the boundaries of what is possible from an ice show. The show holds many world records, including: 'The world's largest pin wheel', 'Most visited show in the world' and 'Longest kick-line in the world'.

The latest spectacular production, Platinum, is a tribute to 70 years of Holiday on Ice. The show will be performed in the UK in early 2015.