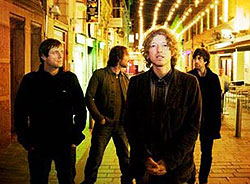 Cast is a four-piece band from Liverpool that was part of the Britpop movement in the mid-nineties. Cast's front man, John Power, was also the former bassist with The La's. Cast enjoyed considerable success with their debut album, All Change, which was released in 1995. The album spawned the top-ten singles Alright, Sandstorm and Walkaway.

Following the release of their fourth album, Beetroot, in 2001, the band cancelled a planned tour and effectively called it a day. Then, in 2010, the band announced that they were to reform for a comeback UK tour which proved very popular.

In the spring of 2012 Cast undertook a UK tour in support of their fifth studio album, Troubled Times. It was Cast's first new album in 10 years.