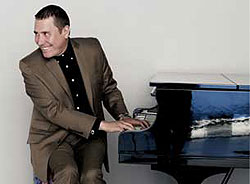 Jools Holland was one of the founder members of the band Squeeze, with who he played keyboards until 1981. Jools has released more than twenty albums since 1978 including Tom Jones and Jools Holland, World of His Own and Beatroute. Jools has had his own television show, Later... with Jools Holland, since 1992 and hosts his annual Hootenanny.

Jools Holland and His Rhythm and Blues Orchestra will be touring the UK again at the end of 2015. The tour will run from late October through to mid December, and will feature special guests KT Tunstall, Pauline Black and Arthur 'Gaps' Hendrickson on selected dates.