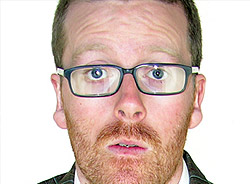 Frankie Boyle is Scotland's funniest export at present. His harsh, close-to-the-bone humour has been applauded and criticised by many but he remains true to his unmoralistic comedic views and is very rarely caught out. Frankie Boyle has appeared as a regular guest on Mock the Week and other TV quiz shows where his sharp, harsh wit has received much acclaim.

In 2012 Frankie Boyle will be touring the UK with his new stand-up show, titled The Last Days of Sodom. Probably not a show for the faint of heart, but sure to be outrageously funny!