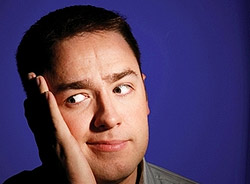 Salford born comedian, Jason Manford's career started with him being in the right place at the right time. Working in the Buzz Comedy Club, Chorlton, at the age of just 17, Jason stood in for a comedian who didn't turn up and was an instant hit. Jason is a team captain on 8 Out Of 10 Cats and a huge Manchester City supporter.